Mahābhārata and archaeology: the chariot of Sanauli and the position of Painted Grey Ware

One of the great archaeological news of 2018 has been the discovery of the 'chariots' in Sanauli, UP, a village in the Ganga-Yamuna Doab where an archaeological site has been found, labelled as Late Harappan or Ochre Coloured Pottery/Copper Hoard. An interesting article from News18 says:

Spate of excavations in Uttar Pradesh’s Sanauli and Chandayana have thrown open possibilities of new cultures for the current archaeologists and they differ from Lal’s hypothesis. Lal correlated the ‘Painted Grey Ware Culture’ of archaeology to Mahabharata and bracketed it in the 1100 BC time frame. The new hypothesis now strikes the correlation between Ochre Coloured Pottery (OCP) with the Mahabharata Culture, which brackets it in 2000 BC.

Based on the excavations conducted under him in Sanauli, where a chariot was found in June, SK Manjul, the director of Institute of Archaeology, under Archaeological Survey of India, delivered a lecture in July 2018 in Delhi. The title of the talk was “Mahabharata and Archaeology: PGW vis a vis OCP/Copper Hoard Culture.”

In the lecture, Manjul made a case for OCP as a culture relation to Mahabharata. The presentation was: “The hypothesis given by BB Lal and others on the basis of archaeological findings in the lower strata at Hastinapur and similar findings from other sites mentioned in the Mahabharata correlated Painted Grey Ware Culture with the Mahabharata Era.” Lal noticed Painted Grey Ware from important sites mentioned in Mahabharata and time bracket of war suggested around 1000-900 BCE. But recent excavations in Sanauli, Barnawa and Chandayana have a different story to tell - that of much earlier culture OCP. [...]

As per the archaeologists, who are votaries of the New Hypothesis, PGW is marked with “rural settlements, pit dwellings and hut. There are weapons, arrow, head small, spear head [maybe arrow head and small spear head?], agriculture tools, bone points, metal iron. No chariots found. It shows limited and distinct pottery traditions. It has very less information on Vedic rituals and traditions.”


On the other hand, the archaeologists say that the OCP is marked with “Advanced weapons and tools, antenna sword, harpoon, celts, dagger and shield, metal copper and advance chariot found. Advance pottery tradition including metal pots. Also, it has similarity with Vedic rituals.”

This connection was already proposed by S.P. Gupta and it was advocated also in a 2017 article by Vinay Kumar Gupta and B.R. Mani about Painted Grey Ware. I have also supported it in my article about the chronology of Mahābhārata and Ṛgveda, after having determined that the great battle should be placed in the year 1432 BC, a date based on the astronomical details from the poem and on the recurrent Purāṇic statement about the 1015 or 1050 years between the birth of Parikṣit (contemporary with the battle) and the coronation of Mahāpadma Nanda that can be placed in 417 or 382 BC (see the article for more details). About the archaeological connection, I wrote there:

If we look at archaeology in order to find a corroboration of this date, we cannot reasonably pretend to find traces of the battle, but we do have some interesting elements for comparison. In the late 15th century B.C. in the area of Kurukṣetra we still have Late Harappan settlements, and in one of them, Bhagwanpura, particularly close to the supposed site of the battle, we find Late Harappan pottery together with Painted Grey Ware, dating here from 1400 B.C.[i] It is well known that according to B.B. Lal this ware is related to the Mahābhārata period because it is found in many localities mentioned in the poem, like Indraprastha (the capital of the Pāṇḍavas, identified with Purana Qila in Delhi), Hastināpura (the capital of the Kauravas), Ahicchatrā (the capital of North Pañcāla) and Kauśāmbī (the capital of South Pañcāla). But we have another ware that is present in the area of the Kurus (Upper Doab) and in the same sites of Hastināpura, Ahicchatrā and Kauśāmbī in the II millennium B.C., namely the so-called Ochre Coloured Pottery, as already observed by S.P. Gupta.[ii] This is the pottery of the first level of the aforementioned sites, it is generally dated 2000-1500 B.C., but the thermoluminescence tests on sherds from Atranjikhera, Lal Qila, Jhinjhana and Nasirpur have given dates between 2650 and 1180 B.C.[iii] About Hastināpura and Kauśāmbī, there is the important tradition that the fifth successor of Parikṣit, Nicakṣu, abandoned the first city, because it was carried away by the Ganges, and made the second one his capital.[iv] B.B. Lal has claimed that this is confirmed by the PGW levels of Hastināpura, where there are traces of a partial flood, and by the fact that we can find a similar PGW culture in Kauśāmbī. But we can observe that also the first, OCP level, of Hastināpura was abandoned, and that also in Kauśāmbī there are OCP levels which have been only hypothetically dated by Sharma in 1960.

I also noticed that PGW is absent from Gujarat, although places like Dvārakā and Prabhāsa in Kathiawar have a central role in the poem in connection with Kṛṣṇa and the Yādavas. And, if Kṛṣṇa's Dvārakā is to be identified with the submerged city found by S.R. Rao near Bet Dwarka, and, as he said, “it is possible to postulate on structural, ceramic and inscriptional evidence that Dwarka was built in the 15th century B.C. when the sea level was lower than at present and was submerged within a hundred years”, we have another confirmation of this chronology, because according to the poem (see here) the city was submerged 36 years after the battle, that is, in 1396 BC, and at the same time the remaining Yādavas abandoned Kathiawar towards Indraprastha after the massacre of their clans called Vṛsṇi, Andhaka and Bhoja. According to Kenoyer, most Late Harappan sites in Gujarat have a break after 1400 BC. Also Mukhtar Ahmed in a book on the end of the Harappan Civilization observes that the Lustrous Red Ware (that was found also in Bet Dwarka) continues until around 1400 BC, and afterwards there is a break in the archaeological record at most sites until around 600 BC. The coincidence is really impressive, and since it appears to confirm so precisely the account of the Mahābhārata we wonder if there are material traces of the migration. Mukhtar Ahmed says that Lustrous Red Ware was found also in Navdatoli III and Ahar IC, in the Ahar-Banas culture. Pargiter (p.279) wrote that the river Banas or Parṇāśa is connected with the Yādava king Devāvṛdha, brother of Andhaka and Vṛṣṇi, and his descendants reigned at Mārttikāvata, "which was apparently in the Śālva country around Mt. Abu", that is, in South Rajasthan where the Ahar-Banas culture was. And Arjuna established one of the emigrating Yādava princes, the son of Kṛtavarman, in Mārttikāvata.


So, if BRW came to Western UP from Rajasthan, we would have a sign of the migration of the Southern Yādavas, taking their seat in the area of Indraprastha in the Doab, where Arjuna brought "the bulk of the people", as Pargiter says and installed Vajra as king. On the other hand, in the Viṣṇu Purāṇa Arjuna establishes Vajra as king in Mathurā, which is much more logical, since Mathurā was already a Yādava capital before the invasion by the king of Magadha Jarāsandha that compelled Kṛṣṇa to go to Dvārakā. 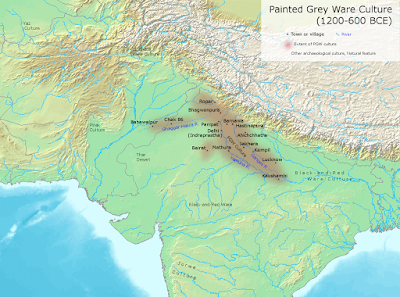 Uesugi continues: "In the western Ganga Valley and northern Rajasthan, the black ware industry is identifiable as having an independent phase between the Bara‐OCP phase and the PGW phase and as continuing to the following PGW‐dominant phase (Gaur 1983). Even in the Ghaggar Valley, BRW and BSW are known to be associated with PGW, although there is no independent phase of BRW and BSW in this region. These pieces of evidence imply that the black ware industry and PGW had some relations."


So, the Painted Grey Ware in the Doab comes after the BRW, and in the Ghaggar valley they come together. This means that the PGW culture is connected with that local tradition, and not with an alleged western migration. What Uesugi also remarks is that the PGW pottery is radically different from the previous Bara-OCP pottery of Late Harappan affinity for the forms and the painting motifs. He also doubts that the overlap of PGW and Late Harappan in Bhagwanpura is real, because it concerns only potsherds and not full vessels in burials. However, even if we accept the overlap, we have to do with two different traditions. Was the PGW culture the result of the arrival of the southern Yādavas? According to Uesugi, the area of origin of PGW can be the Ghaggar valley: "The region of origin of PGW has not been specified, but the dense distribution of PGW sites in the Ghaggar Valley and the cultural sequences in different parts of North India suggest that PGW developed in the Ghaggar Valley. However, it is important to repeat that PGW did not have direct relations with the Bara‐style pottery which was widespread in the preceding period but had connections with the black ware industry in the Ganga Valley. Therefore, the origin of PGW must be searched in its relations with the black ware industry in the east, that is in the connection between the Ghaggar Valley and the Ganga Valley during the second millennium BCE. This is a hypothesis to be tested against more evidence in future studies."
I find quite difficult to accept that the PGW culture could develop in the Ghaggar valley where the local tradition was completely different. It seems more likely that it developed where there was already the similar BRW-BSW. Another region with high frequency of PGW sites is the region of Mathurā or Braj region, as noticed especially by the already cited article by Kumar Gupta and Mani: "The Braj region for sure presents the most dense settlement pattern in the entire sub‐continent and the area west of Yamuna has to be the core area of the PGW where the minimum area required for the presence of a PGW settlement comes out to be just about 16 sq. km. [...] Now, we have quite solid grounds to speak about the authors of the PGW culture. The PGW using people were indigenous to the area where their settlements are found in high density, i.e., the Braj region. They did not come from outside. Their pottery technology seems to be an advancement over the pre‐existing Black Slipped Ware and plain grey ware technology, so they were in continuity of the earlier folks who used Black Slipped Ware with grey core and plain grey ware."


If the Braj or Mathurā region was the place of origin of the PGW, it would be of Yādava origin. Anyway, it is clear that the PGW culture spread in the Kuru-Pañcāla kingdom that was central in the late Vedic period of Brāhmaṇas, a more peaceful culture compared to the Ṛgveda: in the same way, PGW culture seems less warlike than OCP/Copper Hoards, as the same article remarks: "The Mahabharata was a period of continuous warfare and the limited weaponry evidence from PGW horizons does not favour it whereas Copper hoards are associated with OCP on a secure ground and the Copper hoard implements might be indicative of an atmosphere of warfare."
In fact, the new discoveries from Sanauli/Sinauli show us a warrior culture with swords and chariots, but this culture is not only typical of the Mahābhārata: also the Ṛgveda mentions battles, warriors, chariots, and sometimes swords and spears (asi and ṛṣṭi). If the age of the Sanauli chariots is 2000-1800 BC (or also 2100 BC as I have heard from another source) it would correspond to the age of the early Ṛgveda according to my chronology. Finally, we would have the concrete representation of the rathas of those ancient hymns.

Posted by Giacomo Benedetti at 03:51