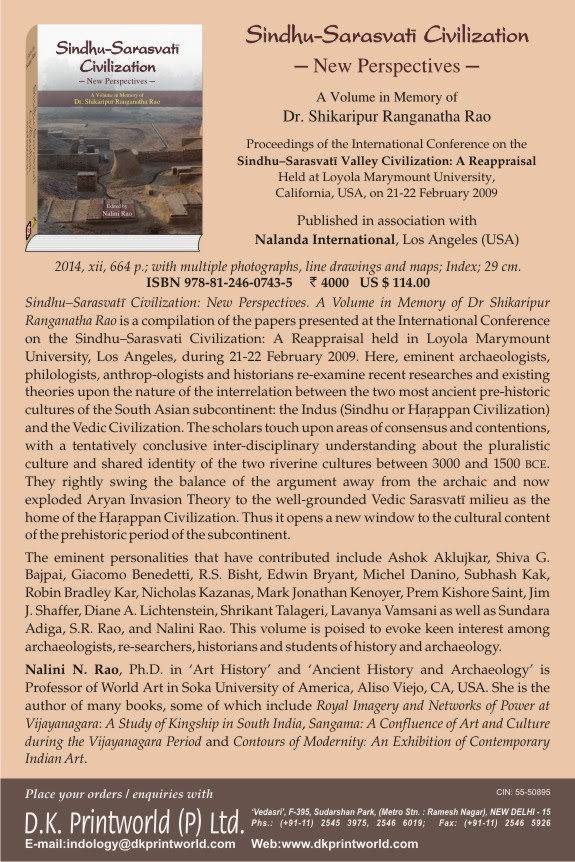 This new book has been recently published, with papers by distinguished scholars and archaeologists, and also by one who is not so distinguished, the author of this blog. It includes some famous Indian archaeologists like R.S. Bisht and the late S.R. Rao (it is dedicated to his memory), American archaeologists like Kenoyer, Shaffer and Lichtenstein, and some scholars of various origins particularly engaged in the debate about the Aryan presence in India: Kazanas, Robin Bradley Kar, Michel Danino and Talageri. My article builds a chronology of Epic-Puranic genealogies of kings according to Pargiter's lists and compares the result with the Vedic and Epic sources and the archaeological data. I had already developed some ideas, but the final result has surprised me for the consistency and richness of the comparison... the only regret is that I could not modify the part about the climatic change and the Sarasvatī river because it was already too late for the editing when I realized that the tectonic theory of the Sutlej is discarded and the change in the rainfall is promoted... I hope that I can do some changes in a future edition!
You can find the book with contents at this link: http://www.dkprintworld.com/product-detail.php?pid=1280857371.
Posted by Giacomo Benedetti at 14:28 2 comments: Links to this post