More on genetics: a possible proof of migration from India to Europe 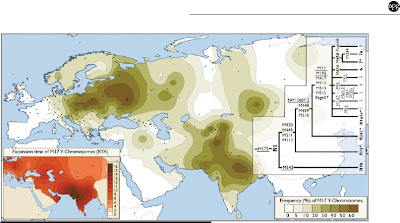 I have found online the already cited article of the American geneticist P.A. Underhill (et alia) on the genetic group R1a at the site http://www.scribd.com/doc/23322591/Underhill-Et-Al-2009-Separating-the-Post-Glacial-Coancestry-of-European-and-Asian-Y-Chromosomes-Within-Hap-Lo-Group-R1a

The little map in red colour here presented shows the calculated age of the haplogroup R1a1a-M17 in different Eurasian regions. It appears clearly that the most ancient area comprehends Sind and Gujarat. In the article, it is said: “Analysis of associated STR diversity proﬁles revealed that among the R1a1a*(xM458) chromosomes the highest diversity is observed among populations of the Indus Valley yielding coalescent times above 14 KYA (thousands of years ago), whereas the R1a1a* diversity declines toward Europe where its maximum diversity and coalescent times of 11.2 KYA are observed in Poland, Slovakia and Crete.” Moreover: “Also noteworthy is the drop in R1a1a* diversity away from the Indus Valley toward central Asia (Kyrgyzstan 5.6 KYA) and the Altai region (8.1 KYA) that marks the eastern boundary of signiﬁcant R1a1a* spread”.

So, on the basis of this calculations we arrive at the conclusion that a South Asian population spread first towards Europe and later towards Central Asia. Then, there is not an ancient migration from Europe to South Asia, or from Central Asia to South Asia, but the opposite.

If we want to connect R1a1a with the Indo-Europeans, and this is always tempting, because this haplogroup seems to be the only one which associates together with significant frequencies Indo-Aryans, Iranians, Anatolians, Greeks, Slavs, and Germanic peoples (less Romance and Celtic speakers), we should admit that the origin of Indo-Europeans is in South Asia, and not in Eastern Europe. Here, we find a mutation of the haplogroup, called R1a1a7:

“In Europe a large proportion of the R1a1a variation is represented by its presently identiﬁed subclade R1a1a7-M458 that is virtually absent in Asia. Its major frequency and relatively low diversity in Europe can be explained thus by a founder effect that according to our coalescent time estimation falls into the early Holocene period, 7.9±2.6 KYA. The highest regional date of 10.7±4.1 KYA among Polish R1a1a7 carriers falls into the period of recolonization of this region by Mesolithic (Swiderian and subsequent cultures) settlers. […] It should be noted, though, that the inevitably large error margins of our coalescent time estimates do not allow us to exclude its association with the establishment of the mainstream Neolithic cultures, including the Linearbandkeramik (LBK), that ﬂourished ca. 7.5-6.5 KYA BP in the Middle Danube (Hungary) and was spread further along the Rhine, Elbe, Oder, Vistula river valleys and beyond the Carpathian Basin.” Then, the R1a1a people in Eastern Europe could be connected with the Neolithic revolution in this area.

The antiquity of this subclade and its absence in Asia shows also that there was no migration from Europe to Central Asia in recent times: “Although the R1a1a* frequency and diversity is highest among Indo-Aryan and Dravidian speakers, the subhaplogroup R1a1a7-M458 frequency peaks among Slavic and Finno-Ugric peoples. Although this distinction by geography is not directly informative about the internal divisions of these separate language families, it might bear some signiﬁcance for assessing dispersal models that have been proposed to explain the spread of Indo-Aryan languages in South Asia as it would exclude any signiﬁcant patrilineal gene ﬂow from East Europe to Asia, at least since the mid-Holocene period.”

The mid-Holocene period is around 6000 years BP, that means that after 4000 BC we cannot suppose a migration from Europe to Central Asia and South Asia, and this refutes all the theories supposing that the Kurgan people of the Pontic region went to Afghanistan during the Bactria-Margiana civilization (III-II mill. BC) and then to India (II mill. BC).

On the other hand, the migration of R1a1a people from South Asia to Europe appears as much earlier than the supposed spread of Indo-European languages, before the Bronze Age, during the Mesolithic or Neolithic period. Then, if we connect R1a1a with the Indo-European speakers, we have to antedate this spread, and we have also to see much of the Neolithic Europe as already Indo-European, reversing Gimbutas’ theory of Old Europe but keeping the concept of a Paleolithic non-Indo-European presence, differently from the Continuity theory of Alinei and Costa. However, not all the R1a1a in Europe is R1a1a7, then maybe we cannot rule out later migrations of people with haplogroup R1a1a from Asia to Europe, bringing a new language: we have examples of migrations into Europe of Iranian peoples like Scythians, Sarmatians and Alans, and of the Indian Gypsies, also in historical times.
Posted by Giacomo Benedetti at 07:05 9 comments: Links to this post