Signs of the Transition


One of the signs of the advent of a ‘new Indology’ is a recent international conference held on 21-22 February 2009, at the Loyola Marymount University (Los Angeles) entitled “The Sindhu-Sarasvati Valley Civilizations: A Reappraisal” (link and image above), with some of the most important names of the Indian archaeology from India and the USA: S.R. Rao, R.S. Bisht, Kenoyer and Shaffer. Moreover, there was an expert of the question of the Aryan invasion like E. Bryant and also a Greek scholar, Kazanas, one of the few Westerners criticizing the invasion theory and the official chronology of the Vedas.

What is particularly interesting in this conference is its opening to positions regarded as heretical by the academic establishment (also in the US); then it gives some hope for an authentic debate and for the Great Transition which various hints suggest as being underway: from the old paradigm to a new one, no more based on the aprioristic theory of the Aryan invasion or migration into India.

(On the base of this conference a volume is going to be published on the Sindhu-Sarasvati civilization, where also a contribution of mine - dealing with a new chronology of the Rigveda and a comparison between archaeology and Indian historical tradition - has been unexpectedly invited; it is already completed and accepted, now waiting for the editing)

One of the driving forces of the Transition is surely Koenraad Elst, Belgian scholar who has written, inter alia, Update on the Aryan Invasion Debate, a book which I found in the library of the “Scuola Normale Superiore” of Pisa six years ago, and which opened to me a new world in the field of South Asia, leading to a real conversion from the ‘invasionism’ to a new perspective. He has a blog where I found also the recension of the last book of Talageri, (http://koenraadelst.blogspot.com/2009/01/great-book-about-great-book.html) one of the most militant authors of the new Indian wave of ‘indigenism’ or OIT (Out of India Theory, in the synthetic label dear to Elst), that is the theory supporting the Indian origin of all the Indo-European peoples. I bought the book and read it (almost totally…) and it is really more sophisticate than the previous ones, but similar to his The Rigveda: A Historical Analysis (Delhi 2000). One of the pros of Talageri is his systematic method, and his results in the comparison of Rigveda and Avesta are quite remarkable, but I do not agree with all his views (particularly the identity Anu-Iranians and Druhyu-Europeans). Anyway, his engagement in the research of the historical truth as an outsider (he has no academic training) should be taken into account by a new Indology.

Posted by Giacomo Benedetti at 11:34 2 comments: Links to this post

A new genetic study, made by scientists based in India and the United States, has revealed that the Indian population descends from two main components: Ancestral South Indians, arrived in the subcontinent around 65000 years ago, and Ancestral North Indians, arrived around 45000 years ago. The northern component is akin to Central Asian, Middle Eastern and European populations, whereas the southern one appears originally very different from Ancestral North Indians ("is as distinct from ancestral north Indians and East Asians as they are from each other"), even if during the millennia it has widely mingled with their descendants, creating the present Indians.

The presumed Aryan invasion of the II millennium B.C. is eclipsed by these data, and the origin of castes is identified in endogamous usages emerged from local tribes, and not from foreign invasions:

Some historians had argued that caste in modern India was an invention of colonialism in the sense that it became more rigid under colonial rule, but the "results indicate that many current distinctions among groups are ancient and that strong endogamy (matrimony within one's own isolated group) must have shaped marriage patterns in India for thousands of years".

In an article on the Times of India (http://timesofindia.indiatimes.com/city/varanasi/Indian-scientist-set-to-change-world-history/articleshow/5301655.cms) we find some other interesting assertions made by Prof. Singh in a conference in Varanasi at the beginning of December:


Saying that Indian population was made up of many populations that have varied genetic compositions, he also added recent studies on DNA linkage indicated an invisible thread (trait) that bounded the Indian population comprising populations of other countries in the sub-continent including Pakistan, Sri Lanka and Malaysia, believed to have originated almost 33,000 years ago.

"We are looking for DNA from Afghanistan, Pakistan and Jammu and Kashmir to trace the origin of ANI population and once that is established, we would be in a position to indicate the movement of ANI population towards European countries that would change the face of world history," he said.


Here you can read another popular article about the same research:
http://timesofindia.indiatimes.com/news/india/Aryan-Dravidian-divide-a-myth-Study/articleshow/5053274.cms

Here is the page of the scientific article with the abstract:

And here you can find freely available supplementary information:

Another recent study, by Sharma et al., published exactly one year ago on the Journal of Human Genetics (http://www.nature.com/jhg/journal/v54/n1/abs/jhg20082a.html), is also concerned with the origin of castes and particularly of Brahmins. It says:

"The observation of R1a* in high frequency for the first time in the literature, as well as analyses using different phylogenetic methods, resolved the controversy of the origin of R1a1*, supporting its origin in the Indian subcontinent. Simultaneously, the presence of R1a1* in very high frequency in Brahmins, irrespective of linguistic and geographic affiliations, suggested it as the founder haplogroup for the population. The co-presence of this haplogroup in many of the tribal populations of India, its existence in high frequency in Saharia (present study) and Chenchu tribes, the high frequency of R1a* in Kashmiri Pandits (KPs—Brahmins) as well as Saharia (tribe) and associated phylogenetic ages supported the autochthonous origin and tribal links of Indian Brahmins, confronting the concepts of recent Central Asian introduction and rank-related Eurasian contribution of the Indian caste system."

That means that the traditional theory of the external origin of Indo-Aryans with their priests, the Brahmins, holders of the sacred Vedic language, is not supported by the genetic research. The haplogroup R1a1 (R1a1a in Underhill's classification, see http://en.wikipedia.org/wiki/R1a1#cite_ref-6), characterized by the mutation M17, has been associated to the Indo-Europeans, and an outdated theory placed its origin in Ukraine, that is in the Kurgan area, apparently supporting Gimbutas' theory. But in India not only we find this haplogroup exceptionally frequent in Brahmins (72.22 % in West Bengal Brahmins), but also quite frequent in tribals like Saharia (Munda speakers, 28.07%) and Chenchu (Dravidian speakers, 26.82%). The highest known variance of R1a1* among Kashmiri Pandits (0.52), is a sign that in this population it is older than in the other ones object of study. 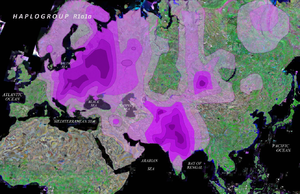 In this image you can see the frequency of R1a1a (old R1a1) according to Underhill et al., showing the high concentration of this haplogroup in South Asia and in Eastern Europe, which appears as a second source of diffusion of this haplogroup, and possibly of the related Indo-European languages.
http://www.nature.com/ejhg/journal/vaop/ncurrent/abs/ejhg2009194a.html 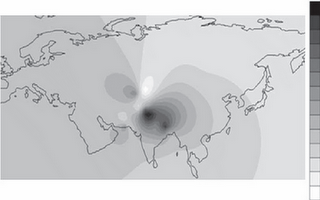 Here is the map (from the cited Sharma's study) of the diversity within the R1a1* haplogroup, clearly showing the maximum in Kashmir and Northern India, thus suggesting the origin of the haplogroup from this area. Here is possible to compare the data about the variance and connected age of the haplogroup in different populations:
http://www.nature.com/jhg/journal/v54/n1/fig_tab/jhg20082t3.html#figure-title

Why a new Indology?

Because Indology is in a period when a change of paradigm is required. The traditional theory of the Aryan invasion and the related chronology are challenged by the new archaeological picture of South Asia, by the discoveries in the field of genetics, and by the new Indian school of indigenism applied to the Vedic literature. Instead of defending the old paradigm, it would be better to elaborate a new one, open to continual revision, but based on the following points:

1) The theory of an Aryan invasion of South Asia has no definite grounds in literature, archaeology, anthropology and genetics.

2) The traditional chronology of the Vedas is not justified, but purely hypothetical, and we should try to reconstruct a new chronology on a valid basis.

3) The Harappan civilisation is to be considered as related to the Vedic civilisation, since the area, and partly the period, are the same.
4) The recent studies in the field of archaeology and anthropology reveal continuity in the Indian prehistory and protohistory.
5) We should give more attention to the Indian historical tradition, following in F.E. Pargiter's footsteps.

That means that we must rethink many ideas about Aryan and pre-Aryan, all the connected racist myths as well as the simplistic division between cultural elements derived from the Aryans and from the pre-Aryans. That also means that we must rethink the relationship between the Indian culture and the other Indo-European cultures and we must investigate if South Asia can be the cradle of the Indo-European languages.


This ‘new Indology’ which rises obviously does not claim to cancel the ‘old Indology’, based on the ‘invasionist’ scenario, because certainly it does not lose all its validity, since fortunately it was not only dealing with the Aryan invasion. But we should accept that we cannot continue to affirm and spread the old paradigm as if it were a natural truth, as if nothing had happened in the knowledge of the Indian past. Change requires effort and maybe correction of what we have stated in the past, but it is the law of the world, of science, and a fascinating challenge.

Posted by Giacomo Benedetti at 08:55 18 comments: Links to this post