Which animal was the Unicorn of the Indus seals? 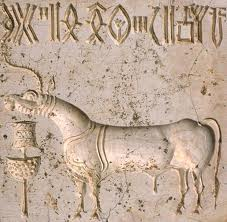 The image of the Indus 'unicorn' is naturally well known among those interested in Harappan archaeology. It was interpreted as a unicorn already by Marshall, who wrote the first book on the Indus civilization (see here in a recent article by Kenoyer), but Mackay and others have proposed that the single horn is an artistic convention for two horns in profile (see here in a book of Possehl). Possehl also wrote that "there are a few seals with unicorn-type bulls with two horns". Farmer discusses the topic (see here) with some examples, and he arrives at the conclusion that there are no such cases in the Indus corpus of seals. However, one of the examples is identifiable as a 'unicorn-type bull' with the typical 'pipal leaf' design on the shoulder and it has two horns. But this exceptional case can also show that if the artist wanted to make two horns he could reproduce them clearly, and so we can reverse Possehl's argument. And the final proof that the idea of a unicorn was present in the Harappan civilization is given by the finding of three-dimensional figurines with one horn like this (read also here): 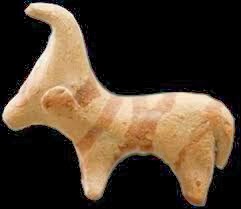 But which kind of animal is meant on the seals and in that figurine? The body is clearly bovine, but the neck is too long, and the head too narrow. And what are those strange lines on the shoulder and the neck?
Before giving an answer, we should search for the unicorn in Indian tradition. Now, Ekaśṛṅga 'having one horn' is a Sanskrit epithet that is found particularly in association with Varāha, the boar as Avatāra of Viṣṇu, as in MBh XII.330.27: ekaśṛṅgaḥ purā bhūtvā varāho divyadarśanaḥ / imām uddhṛtavān bhūmim ekaśṛṅgas tato hy aham. "Having assumed, in the past, the form of a boar with a single horn, of a divine aspect, I raised this (submerged) Earth. Therefore I am the Unicorn."
Well, we can be sure that the Indus unicorn is not a boar, and so we must search elsewhere.
And actually there is another Ekaśṛṅga, in an ancient Buddhist text which is presently my main object of study, the Mahāvastu. There, we find a Ṛṣi called Ekaśṛṅga, whose story is a clear variant of the tale of Ṛśyaśṛṅga, which is found in the Mahābhārata and in the Rāmāyaṇa. Now, the name Ṛśyaśṛṅga means 'horn of the ṛśya' or 'having the horn of the ṛśya'. What is the ṛśya? It is the 'white-footed antelope' as Monier-Williams says, the Boselaphus tragocamelus, best known as nilgai or 'blue bull', because of its similarity with a bull and its iron-blue colour. It is called roz in Punjabi/Haryanvi and roj in Gujarati. The female is called rohit in Sanskrit, because of its reddish colour. So, we have a character that is called Ṛśyaśṛṅga in one context and Ekaśṛṅga in another, but he is clearly the same character, the son of a Ṛṣi born in the wilderness (normally from a female antelope or doe, mṛgī, who has drunk water or urine mixed with the semen of the Ṛṣi). He is described as having one horn of a ṛśya on his head, being the reason of his name, in MBh III.110.17: tasyarśya śṛṅgaṃ śirasi rājann āsīn mahātmanaḥ / tenarśyaśṛṅga ity evaṃ tadā sa prathito 'bhavat. Also in the Chinese translation of the Buddhist Mahāyāna treatise called Mahāprajñāpāramitāśāstra, we find that the same character, here called Unicorn as in the Mahāvastu, has one horn on his head. There are two important features of this figure in different variants of the story: his connection with rain and drought and with the birth of sons. In the Rāmāyaṇa and Mahābhārata he is attracted in order to bring rain to the kingdom of Aṅga, thanks to his ascetic power, and in the Rāmāyaṇa he also performs a sacrifice for bringing sons to Daśaratha. The cult of Shringi Rishi for bringing rain is still alive in Himachal Pradesh, and according to Monier-Williams, śṛṅga is also the name of a Muni "of whom, in some parts of India, on occasions of drought, earthen images are said to be made and worshipped for rain".
We do not know how these earthen images were made at the time of the British scholar, but it is interesting that in the Harappan civilization we have earthen figurines of the unicorn with a hole in the belly, which suggests that they were mounted on a stick to be carried in a ritual (see here).

So, we can think that the hybrid character of Ṛśyaśṛṅga/Ekaśṛṅga was an anthropomorphization of the original animal nilgai. This animal is regarded as sacred as the cow by Hindu farmers (read here and this article), and it was also the form taken by Prajāpati in the myth of Aitareya Brāhmaṇa III.33, which explains the origin of the constellation Mṛgaśiras, which is part of Orion. In this context, it is maybe significant that α Orionis or Betelgeuse is called ārdrā ‘moist’ in Sanskrit tradition, evidently because it was associated with the rainy season. The deity associated with this star is Rudra, who is the archer himself of that myth and a storm god, and Sirius is also associated with ārdrā, which is often used in the plural or, with the name bāhū, in the dual. In the Zoroastrian Bundahišn (19.1-12) there is a gigantic three-legged ass with one horn living in the world-ocean, helping Tištrya (the star Sirius), the deity of rain, to take the water from the cosmic sea Vourukaša, purifying the water by urinating in it, and making pregnant with his cry all good creatures.
According to Pañcaviṃśa Brāhmaṇa V.4.13-14, during the description of the Mahāvrata (a ritual with clear connections with fertility and water), it is recited the ṛśyasya sāman, or ‘melody of the nilgai bull’. Then a myth is given where all beings praised the different members of Indra, but only the ṛśya praised one member, which the commentator identifies with the ‘secret part’ or sexual organ. Thus, this animal is related not only to the generative faculty, but also to the god Indra.
In Atharvaveda IV.4, a charm to restore virile power, we have the phrase ārśa vṛṣṇya for indicating the virile power, then the invitation to approach the woman like the nilgai bull (here called ṛśa) his female. And the virility of the Indus unicorn is always stressed on the seals, as remarked also here in the already cited Kenoyer's article. In the same article, he cites the opinion that the body of the unicorn of the seals resembles that of an antelope of heavy build.
Now, let's see two images of the nilgai, in order to show that it can correspond to the unicorn of the seals: 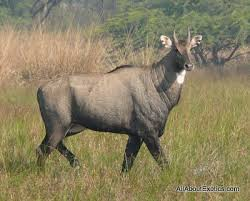 As is possible to note, the neck of the first picture has some deep wrinkles that can be identified with the lines often found on the neck of the unicorn of the Indus seals. And over the forelegs we see the skin forming a sort of design which reminds of the 'pipal leaf' motif on the Indus unicorn. The same design is even clearer in the second picture of the running nilgai, which was obviously a common sight in ancient India (we should add that remains of nilgai have been commonly found in Harappan sites).
So, textual and zoological evidence leads us to the same conclusion: the authors of the Indus seals intended to depict a mythical ṛśya with one long horn. And this mythical figure, associated (possibly identified) with Indra and Prajāpati, was transformed in the later tradition into a Ṛṣi bringer of rain and fertility, presented as a son (in the Vaṃśa Brāhmaṇa) or descendant of Kaśyapa, the Ṛṣi creator of living beings.

Giacomo Benedetti
Kyoto, 3-3-2014
Addendum, 28-6-2014: I have discovered that Asko Parpola has reached the same conclusions, following essentially the same connections, in a beautiful and very rich article titled "the Harappan unicorn in Eurasian and South Asian perspectives in  Current studies of the Indus Civilization, vol.IX, 2012. What is different is the linguistic identification of the Harappan civilization, and I find that these conclusions support rather the linguistic and cultural continuity between the Harappan and the historical civilization reflected in the Vedas, the Epics and Buddhist texts of North India rather than the Dravidian theory.

Posted by Giacomo Benedetti at 19:09