In July there has been in Paris a great conference of the European Association for South Asian Archaeology and Art with the presence of many important archaeologists and scholars from Europe, Asia and America (you can see here the abstracts), like Kenoyer, Osada, Vidale, Skilling, Karttunen, and Sanjeev Gupta, an Indian geologist based in the Imperial College of London. He has spoken of some discoveries already discussed the last year (see here and this article), which concern the 'Ghaggar', ugly modern name of (a part of) the Sarasvatī. Recent studies on the deposits of Kalibangan have shown that there is not sand of a Himalayan river during the Mature Harappan Period, but only before 15 kya. That means that after that age the river was only seasonal, based on the monsoons, who were stronger in the 3rd millennium BC. The sites on the old river bed could also exploit the fertility of the depression were the rain waters accumulated. As Osada of the 'Indus project' (based in Kyoto) insisted, the 'Ghaggar' was not a mighty river in the Harappan period, and this datum has been used for denying that the Vedic Sarasvatī is real or identifiable with the Ghaggar. But all this harmonizes with the name itself 'Sarasvatī', meaning 'rich in pools or lakes', which can be said of a rain-fed river. Moreover, it is true that the Ṛgveda speaks of a river flowing from the mountains to the sea, but the same is said in the Mahabharata, where it is clearly described the disappearance of the river at Vināśana in the desert, from where, it is said, it re-emerges at Camasodbheda (MBh IX.34.78; III.80.118). Moreover, in RV III.33 the Sutlej (Śutudrī) joins the Beas (Vipāś), and the fact that there is no allusion to a change of course gives no more chronological problems. In the Mahābhārata (XII.139.13-24), the catastrophe between the Tretā and Dvāpara Yuga, which can be seen as a description of the crisis at the end of the Mature Harappan period, is caused by a lack of rain, and not by the change of a river course. So, the data given by Sengupta and Osada are consistent with the tradition. 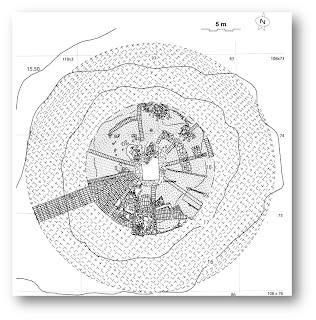 Another interesting paper was that of R.S. Bisht, read by Kenoyer, because unfortunately the Indian archaeologist was absent. It was about some particular hemispherical tumuli in the cemetery of Dholavira, which resemble some structures found in Bahrain (2200-2000 BC, or more precisely 2050-2000 BC) and also the historical Buddhist Stūpas! Particularly, Tumulus 1 (see above) has ten radial walls forming a kind of wheel-structure, which are found also in Bahrain, and in Stūpas (see below the Sanghol Stūpa). So, it seems that Bisht is going to assert that also the Stūpas have their roots in the Harappan civilization. About Bahrain, we can suppose that these tumuli are  connected there with the merchants from Gujarat: 2200-2000 BC is the same period of the seals found in Bahrain of clear 'Indus' character. But for which kind of people where these tumuli used? Maybe for religious men, like the Buddhist Stūpas? And are there other traces of Stūpas in India before the Buddhist period? According to Buddhist tradition, they were normally used before Buddha Gautama for the Pratyekabuddhas, who were wandering ascetics, and also Jains used to erect Stūpas. 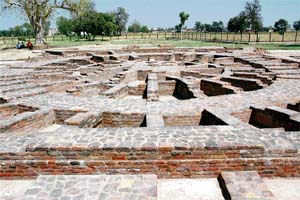 What is also interesting is that apparently the symbol of the spoked wheel was present not only in the script, but also in funerary architecture: another possible sign of the importance of the spoked wheel in the Indian ideology. And the presence of this structure also in Bahrain could show the diffusion from India to the Middle East of (at least the idea of) the spoked wheel already at the end of the 2nd millennium BC.

Posted by Giacomo Benedetti at 09:16