We British Europeans are Aryans, and far more pure and genuine Aryans than the Hindus, and no talk of the Hindus can alter our race [...] It is the Hindus who have altered and deteriorated, and not we! The Hindu has become the coffee dregs, while we have remained the cream of the Aryan race. [...] The Hindu has become a sooty, dingy-coloured earthen pot, by rubbing against black aborigines rather too freely; and he consequently pretends to despise the white porcelain bowl.

(cited by D.K. Chakrabarti in The Battle for Ancient India. An Essay in the Sociopolitics of Indian Archaeology, New Delhi 2008)


It is really paradoxical that many European thinkers, after having adopted the concept of ‘Aryan’ from the Sanskrit and Avestan traditions, came to believe that Europeans (British, Germans, Italians, French) were the real Aryans, certainly more than the Indians, because the Aryans are white and blonde, and Indians are evidently mixed with a dark race…
But all this speaking of an Aryan race appears as an obsession of the modern Europeans, substantially ignored by those who actually used the term ārya-, which in India meant ‘noble’, indicating Brahmins, Kṣatriyas and Vaiśyas, the educated people who had access to the Vedas, to Sanskrit language, and were consecrated by the Vedic rites. The birth in a certain lineage was important, but that ‘nobility’ was certainly also a cultural fact, and it was not a matter of skin colour. We have two great ‘Āryas’ of the tradition which are called ‘Kr̥ṣṇa’, which means ‘black’: the famous king of the Yādavas and divine teacher of the Gīta, and Vyāsa, the Brahmin who collected the Vedas, named Kr̥ṣṇa Dvaipāyana. In the Vedas, Āryas are opposed to Dāsas, which means ‘servants’, or to Dasyus, which is more specifically used for ‘barbarians’; in the Purāṇas we find them opposed to Śūdras, wich means, again, ‘servants, labourers’. This opposition was also ethnic, as many tribes outside the confines of the ‘Āryāvarta’ (situated in North India between the Himalayas and the Vindhyas), were considered Dasyus or Śūdras, but without distinction about the skin colour: also Iranians (Pahlavas) and Greeks (Yavanas) were considered as degenerated Kṣatriyas. I do not know, but I imagine that a similar conception was applied to the Englishmen, provoking the reaction of Carlleyle…
Outside of the Vedic tradition, in Buddhism, ārya was even applied to the ‘four noble Truths’ taught by the Buddha, and to those ‘Noble ones’ who could see them, irrespective of their social origin. In the Mahāyāna teachings, the same qualification is given to those who can see directly the ultimate reality, the profound ‘emptiness’ of phenomena. In those contexts, really the race was not taken into consideration, because ārya is there a spiritual status to be attained.
A bit different is the situation in the Avesta of Iranians, because there ‘Airya’ indicates clearly a people different from ‘Tuiryas’ and others, and was used as a name of the Iranians. The Vendidad, an Avestan text which has an important geographical introduction, also speaks of the ‘Airyanəm Vaējō’, which can mean ‘land of the swift rivers of the Aryans’, but which has been interpreted by Darmesteter (1898) as the ‘seed of the Aryans’ (http://www.avesta.org/vendidad/vd1sbe.htm).
It is described as an ideal land where the progenitor Yima collected the creatures, included the best specimens of the humans, to save them from a terrible winter (cp. also the interesting page http://www.heritageinstitute.com/zoroastrianism/aryans/location.htm). This myth seems to have suggested a new myth in the first Europeans discovering this literature…
In fact, when the Europeans, in the nineteenth century, began to familiarize with the Sanskrit and Avestan traditions, they were in a colonialist and positivistic frame of mind, they were inclined to see all in terms of biological races, and of the superiority of the white race… Previously, ethnic, social and religious differences were more important, and the East was seen as the origin of civilization and wisdom (also the Christian religion came from Asia), but in the nineteenth century they saw everywhere the supremacy of the white Europeans, and they were induced to think that this was due to a racial, intrinsic superiority. Moreover, they had to justify somehow their dominion. The concept of ‘Aryan’, with its meaning of ‘noble’, attracted their minds, it became an enticing title of nobility, which they interpreted in a racial sense, because that apparently was the only way in which they could conceive it. Not only, the new great powers, after the initial colonial supremacy of Spaniards and Portuguese, were Great Britain, France and Germany, whose peoples were characterized by more Nordic features, and by a descent from Germans and Celts. Such ancient peoples were traditionally considered as uncivilized barbarians (from the Greek and Latin point of view), but through the identification of Aryans with Nordic Europeans, they could become the best and original specimens of the ‘Aryan race’. Since they could not claim an ancient civilization, they had to justify their supremacy on the base of the mere racial identity. 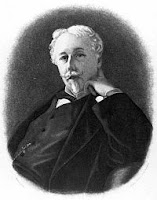 The first important theorist of this Aryan race was the French aristocrat Arthur de Gobineau (here on the left), who, at the middle of the XIX century asserted that the "master race" were the Northern European "Aryans", who had remained "racially pure". Southern Europeans (including Spaniards and Southern Frenchmen), Eastern Europeans, North Africans, Middle Easterners, Iranians, Central Asians, Indians, he all considered racially mixed, degenerated through the miscegenation, and thus less than ideal (http://en.wikipedia.org/wiki/Aryan).

He was a Catholic, but evidently influenced by the Positivistic biological attitude, which deeply influenced also the theorists of esotericism, like the founder of theosophy, Blavatsky, who saw the Aryans as the Fifth Race, coming from Atlantis and superior to the Semites, or Edouard Schuré (here on the right), who in his Les grands initiés (1899) displays a history of mankind based on four races: red, black, yellow and white, coming from four different continents. The white race came from Europe, developed the Aryan civilization in Iran, and went to invade India, where the “pure conquering race of the Aryans found itself between other races very mixed and much inferior, strange crossbreeding of yellow and red types, which for a thousand subtle gradations descended to black.” The French esotericist compares the Hindu civilization to a mountain with, at the base, the ‘melanic’ race, source of ardent passions, on the top the ‘pure Aryans’, with their moral sense and sublime metaphysical aspirations. So, we find the race connected with moral and spiritual values, without explaining the reason for such a connection.

After these simplistic racist speculations, the theories of an Indian Pandit, Lachhmi Dhar Kalla, expounded in 1930 (when in Germany the Nazi ideology was spreading) in his The Home of the Aryas, appear as much more enlightened. He sustained that the original homeland of the ‘Aryas’ (meant mainly in a linguistic sense), for various reasons (the most original being that of the unity of Vedic and Proto-Indoeuropean accent) was the Northwestern Himalaya. In the conclusion (pp.106-7) he states that the Aryas in the past have always supported a synthesis with the races they met: in India they gave us the concept of Bharata Varsha, the united India of all races (also Dravidians and Mundas) and in the West they united with non-Aryan races (the European natives) and they elevated them to the level of their culture. For the future of India, he prospects a union also with the ‘Semitic cultural groups’ (represented by Muslims and apparently also by Christians), union which he calls Neo-Hindustan. At the end, he embarks on a panegyric of the unifying action of the Aryas:

After centuries of work, the Aryas have now prepared the world for such a larger unity of mankind by creating a common mentality in different races through the diffusion of the Aryan language in distant parts of the world. [...] We must thank the ancient Arya, the 'Indo-European' man, who thus long ago laid the foundations of the unity of the East and the West, and took the fire of his civilization to every home he could find.

We see here how the concept of ‘Arya’, indicating the Indo-European but carrying an idea of nobility, could be used in a non-racist sense, affirming a cultural superiority which does not bring to self-segregation, but to union with other races and cultures. Today even such a cultural exaltation of Indo-Europeans appears as dangerous and inacceptable (besides, Kalla himself states that he does not want to ignore the cultural value of Semites and Chinese), but the call for a culture shared by the Indo-European speakers can still be valid, as an ancient bridge between some peoples of the East (Indians and Iranians) and many peoples of the West.
Particularly valid seems to me the idea that Indo-Europeans melted in the West with non-Indo-European local peoples (why natives should always be black or red?), including the Brits, who genetically are very far from the genetic scenery of Indians, Iranians, Slavs and Balts.
So, since these peoples, on a linguistic basis, are the nearest to Proto-Indo-Europeans, the Brits, also from Carlleyle’s racial point of view, do not result exactly as "far more pure and genuine Aryans than the Hindus". On the other hand, how could the imperialists grant the colonized and ‘Easterners’ the honour of representing the people of the ‘Noble Ones’?
Posted by Giacomo Benedetti at 15:05